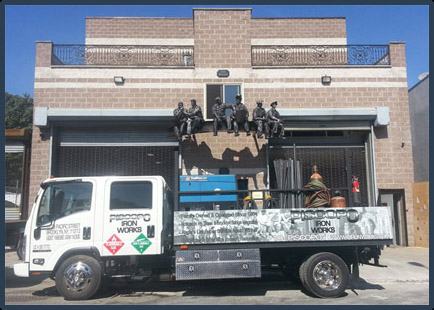 Piscopo Iron Works was founded in the early 1970’s by Salvatore Piscopo. A skilled metalworker, he had a dream of creating expertly forged window grates, cellar doors, ornamental rails and porches for people who wanted a special touch included into the structure of their home or business.

In 1985, Francesco Nogara, an Italian-born artisan, became the new owner and operator of Piscopo Iron Works. From the tender age of seven, Nogara apprenticed with an ironworker in the town of Licata, Sicily. He learned artistic techniques that would become all but unheard of once pre-fabricated materials were prominently used in the wrought iron field. Although Nogara’s envision was similar to those of Salvatore’s, his artistry and extensive knowledge of ironwork would aid in taking the business to another level of creativity and flair.

In 1995, Francesco’s son, Gasper Nogara, joined the family business. Like his father before him, Gasper began learning the ins and outs of ironwork at an early age, spending summers during high school forging intricately decorated wrought iron items. Gasper brought new ideas to Piscopo and with a degree in Construction Technology from New York Technical College, Gasper helped the business expand by entering the field of structural steel. The business also began fabricating steel for home extensions to six-story buildings.

After much success and over 20 years invested into Piscopo Iron Works, Francesco retired and Gasper took sole ownership in 2003. The business was also relocated to Crown Heights, allowing Gasper to give the company a more modernized look and to accommodate our growing clientele.

Despite all the changes and upgrades, our company still uses the same traditional methods taught to Francesco and passed down to Gasper. We still acquire a small business mentality, providing our customers with one-on-one services and dedication.

We have been featured in The New York Times and Brooklyn Bridge Magazine!